Autism - how it makes me feel 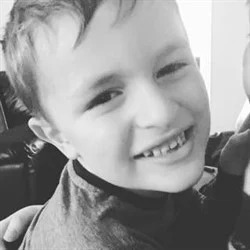 A word I barely knew existed.

A word I never knew would consume my entire life the way it has.

A word that I associated with just one person I had met on the autism spectrum. Funnily enough, the one person I knew with autism was an older boy whose hair I used to cut. He was severe and non verbal too – maybe that was my preparation.

I can remember so vividly when my husband first mentioned the word autism.

We were driving home from a shopping trip, which hadn’t gone great with a 16 month old Mason. I would pass by all the shoppers with children in pushchairs and wonder why Mason wouldn’t ever just behave like all those other children.

My husband is a secondary school teacher so had a little knowledge in that area. With Mason so heavily into books and numbers and having the most amazing memory, along with a few other things, our minds were already starting to wonder if our perfect little boy was different.

We were at the traffic lights when he said, ‘Maybe he has a bit of autism.’

As any other parent knows…off you go into Google and research the hell out of it.

I found an ‘autism checklist’ for about age 2, a long list of common characteristics and found Mason maybe matched about 90% of that list.

I was in complete denial.

At such a young age, I would just pass them off as ‘he’ll change’ and often talk myself out of it.

The more time went on, there was no talking myself out of it – something wasn’t right.

I had Mason down for a local playgroup for when he turned 2 and thought it may help with him socialising with others his age. At this point, I had no professionals involved and I didn’t know where to go or who to contact. I turned up at his playgroup’s induction and just blurted out to them, ‘I think he has autism!’ His playgroup were really good to us and said they knew a lady who could come out and observe Mason to see if there was any concerns and if he needed to be further referred.

That there, was the start of our diagnosis journey.

A lot of changes happened with how children are diagnosed now – it’s a different process.

For us, he was diagnosed about a year after that playgroup induction.

After he was diagnosed we felt utterly lost. We were heartbroken and trying to figure out a way to help our little boy. We were still learning about autism and at that age, we had no idea what Mason would become.

Those questions that can’t be answered or are unknown is what keeps you up at night.

So after a difficult year, and a new baby in that time too, we found ourselves with a newborn and a 3 year old facing many difficulties.

Mason was accepted into a special needs nursery, which in fact was the best nursery and the best staff available to him at that time, although I will never forget the day I received the letter from the local school I had his name down for offering a morning place. It was crushing. I just thought, ‘This was the path I chose for you,’ but along another path we went.

The nursery flourished Mason – they helped him come out of his shell and he loved it there. I had the most amazing relationship with his key worker, Sharron – she genuinely cared for him so much.

It broke my heart when the time came for him to leave.

The next chapter was school.

Mason settled into school very quickly – he knew many of the children from his class as they filtered over from nursery. The routine there was good for him and by his age now he was ready to have his little mind occupied longer.

He liked his teacher Kelly and knew all his classmates in ‘rainbow class’ well.

This is the part where I wish I could tell you how much he progressed.

Aged 4-5 was really the year we learned the severity of his autism. Meltdowns were endless, the weekends and school holidays were dreadful. Mason’s need for continuity and routine were so important and he struggled on those days. We introduced visuals more, visual timetables every day so he knew what to expect. On the whole these did help him, but didn’t solve any of our problems.

It’s funny with autism, because you grow with your child. It’s only when you see a child the same age as yours do you realise just how behind in every aspect they are.

We still had no speech, and we were still spoon-feeding Mason his tea. He would eat the same thing, day in, day out, every meal, every day.

Potty training was way off; he would just stand and pee anywhere.

We realised that at the age he was, the way autism would impact his life would be massive.

I can honestly say between this time (September 2016 to present) has been the worst time we’ve experienced with Mason. Not only have we also added another new baby boy, we have seen a side to Mason we never quite have before.

Now this is the side of autism that not many people talk about.

People think that somebody with autism has these amazing gifts, which many do – Mason has many – but they don’t see the pain that a child has to go through.

If I could take autism away, I would do it in a heartbeat. I would rather have Mason with autism than not have him at all, but to see your child, your first born son, go through what he goes through is literally earth shattering.

To see your own child so full of anxiety, so full of anger and not know how to express this other than digging his nails so hard into your skin that they draw blood, or to see him punch himself in the head – it brings you emotions you never knew existed.

The worst thing I find, as a mother is, I can’t help him. I can’t fix what goes on in his head, nothing can. I have to make sure he is safe, my other children are safe and let him ride the meltdown out.

With my three year old, a kiss and cuddle solves everything – that doesn’t work with Mason. I can’t touch him, I can’t hold him and tell him everything is going to be OK.

Mason is unpredictable; he doesn’t have ‘triggers,’ he can explode at any given time, any place, anywhere. It’s a ‘state of mind’ he’s in at that time. These dark spells last months at a time. In that time, he looks so lost in our world, it’s like he’s on a different planet to us.

What mother wants that for her child?

They say when your child is diagnosed with autism, you have to allow yourself a ‘grieving process’ – you have to grieve for the child you thought you were going to have. I still don’t think I’m over that process and to be honest, I don’t think I ever will be. I embraced autism into my life, it’s in my heart, but I will never fully accept it. I love my son so much but I still feel so angry it happened to my child, that he can’t live his life like a careless little boy. He will lose out on his childhood, Christmas he will never embrace, the Tooth Fairy, the amazing feeling of breaking up from school for the summer.

I will always do my best for him, I push him to his limits without overwhelming him, but it makes me so sad on what he will miss out on.