Alison Ferst reports
Unless you are a parent of a child on the autism spectrum, it’s hard to appreciate what family life is like behind closed doors and the daily struggle to ensure the safety, security and happiness of your children. For World Autism Awareness Week, we are sharing a parent’s own words on family life through the lens of autism. Although she does not want to be named, our parent is mum to two boys, Charlie 12 and Andrew 10. Charlie is on the autistic spectrum and Andrew is neurotypical.
Living with autism in the family is hard, it’s stressful and sometimes you just want to press the escape button. Then your child will say something funny and your heart just melts.

We had to wait a long time for Charlie’s diagnosis and that is very hard, just not knowing. That is where Daisy Chain comes in and helps. You are desperately trying to make your child’s life better but you don’t understand the system. It’s such a frustrating time and I found it really stressful.

I was furious with the system because it made no sense to me. To hear about other families where children were hurting themselves, hurting their parents physically, where parents have to remove objects that could be used to hurt is awful. If you don’t get the interventions you need early enough it can be a terrible experience. For some families, you can see that these young people will end up in trouble, prison or hospital eventually if they don’t get the intervention they need.

It’s only at somewhere like Daisy Chain where you don’t have to worry about being judged and you can get help with strategies to alleviate damaging behaviours. It has really helped me when I needed to find ways to protect my youngest from the difficulties Charlie is experiencing. Also, it helps Andrew with the understanding that Charlie does not mean the things he says and does.

Daisy Chain is somewhere you can learn to understand yourself that you are not a bad parent, it’s not your fault. I had a family session when the situation felt like a crisis and the boys were not coping well with being around each other. Andrew can copy Charlie’s behaviour and get quite aggressive. Charlie can verbalise very well but he doesn’t mean the things he says but it is heartbreaking to see Andrew copy him. To be able to sit down at Daisy Chain with a third person who has the knowledge of autism can help you reset the behaviours. To have that time to put things into perspective is invaluable.

Charlie was my first child and he was a very challenging baby but I just thought that was him. He was in special care for nine days when he was born. He didn’t sleep, he didn’t eat, he had to be with me at all times but I still just thought it was his personality. Then Andrew came along two years later and what a difference in him. He slept, he ate, he is so confident in himself whereas Charlie is not but I still didn’t know anything about autism or think anything was wrong. He was fine at school until he was seven years old then he just seemed to fall off a cliff.

When I found out about autism and started to read about it, it was like the penny dropping, everything started fitting into place. I began to make sense of Charlie. When we got the diagnosis, it was a relief at first because of being able to make sense of his behaviours but then I went through the grieving process. At first it was panic that he would not have a life, he wouldn’t be able to be independent; the child I thought I had is not the child I have, feeling you have lost the child you had. Then the fight kicks in because you start to feel you have to fight to get what your child needs and with that comes the acceptance, then you do everything you can to make their life easier and better.

It’s not easy. Charlie will not wear socks or a coat and he will be waiting outside school for me to pick him up absolutely freezing in the winter. It breaks your heart. He has gone through a phase of scratching himself and pulling his hair out, really hurting himself and getting infections and you tear your own hair out wondering how to help and prevent these destructive behaviours, it’s so painful as a parent.

Charlie has been bullied at school and I am proud of him because he manages to cope but it tears you up inside as his mum. All you want to do is wrap them up and keep them safe from the world but you can’t do that.

I have health issues myself and it makes you fear for the future of your children but I try not to let myself think like that because you have to live in the here and now. I have to teach them as much as possible, teach them the things that will be important for them to understand when they get older.

Daily life can be a major challenge but having Daisy Chain is a huge help. For Charlie, it is somewhere he can be himself. Charlie needs to accept his condition and learn to understand it. Andrew goes to Sibz and he loves that too. There is much that Daisy Chain offers and you can access the services that are most important to you as a family. 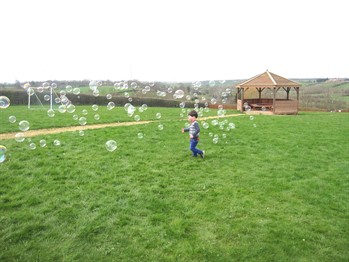