When Kerrie and Karl’s two-year-old son Kai was diagnosed with autism, they were shell-shocked to receive the news as it came just as their second child Kayden was due to be born.

“We knew nothing about autism,” says Kerrie. “As Kai was our first child we just thought he was a bit lazy, a typical boy. When we look back, the symptoms were there – he didn’t want to be put down, he wouldn’t sleep unless one of us was holding him. His autism was picked up at his two-year review. I remember wondering if that meant he was going to die as I knew nothing about the condition,” she explains.

When Kayden was born, Kerrie and Karl were on the lookout for autistic traits but Kayden initially seemed fine until he reached 18-months-old. “He suddenly just stopped answering to his name, he started toe walking and basically stopped responding to us. It was a shock because it happened so suddenly.”

Kayden followed brother Kai in being diagnosed with an Autism Spectrum Disorder when he was two-years-old. The couple now also have a four-year-old daughter, Keisha who is undergoing diagnosis for Asperger’s Syndrome.

Kerrie explains, “If we didn’t have the boys, I don’t think we would have noticed anything with Keisha but we are picking up a few traits such as controlling behaviours, meltdowns, she can’t stand the bell ringing in school and she will tie her dress in a big knot round her middle for the sensory pressure.”

Kerrie spent time at the Links support group for parents and carers and attending the Toddler Group when the children were younger, “It’s hard not to get depressed when you are worried about how to cope. We try to put a brave face on and it helps to have other parents to talk to who understand what you are going through.”

As the children have got older – Kai is now eight, Kayden is six and Keisha is four, life is not easy dealing with their behavioural traits. It’s a full-time job for Kerrie and Karl with the house adapted with safety gates and cameras. The children are the whole focus of their life – the couple have three separate school pick-ups as Kai has a phobia of the school bus and because it is hard to control outdoor environments for all three children, much of their time is spent indoors. 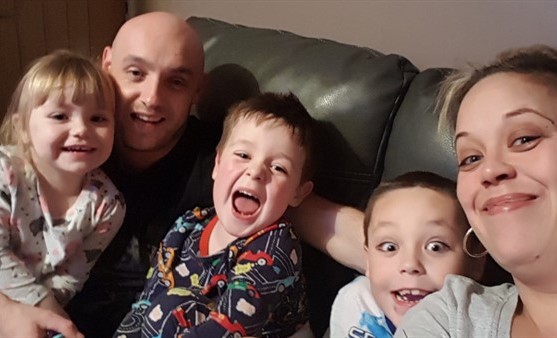 Daisy Chain is where the whole family feel at home – the monthly Sunday high needs sessions are fun for all the family where they can be together and know that their needs will be met and they can relax and enjoy being a family.

Karl adds, “Kai responds well to the environment and there is lots for them to do at Daisy Chain. It’s also great for the school holiday clubs where they can enjoy the sessions in a safe place. I don’t know how we would manage without those sessions. The boys enjoy the sensory room and the soft play.”

Although, Kayden has more speech than Kai, he has suffered a seizure and has a lot of sensory issues. Nevertheless, Kayden adores Daisy Chain especially playing with the trains, “Like many children with autism he is obsessed with Thomas,” Kerrie laughs.

Despite a lack of sleep some nights, Kerrie and Karl focus on the progress all the children are making. “It can be exhausting at times but it’s worth it to see them growing and developing,” says Karl.

Kerrie agrees, “They are so different and it is lovely to see their personalities coming out. Kai is a computer whizz, loves music and instruments while Kayden loves reading and story-telling – he is definitely going to be an actor. Keisha is very sporty, loves singing and has a great voice as well as being something of a fashion guru.”

Kerrie concludes, “The kids come first and they have come a long way, they are building life skills and that is very important to us.”