Despite a knee injury and gruelling training through a harsh winter and long hot summer, Ste Malcolm managed to achieve his goal of competing in the London Marathon by the age of 40 – and he raised a whopping £5,000 for Daisy Chain for his efforts.
Retail manager Ste scooped a place in the ballot for the 2018 Virgin Money London Marathon and picked Daisy Chain as his chosen charity because his seven-year-old son Zac, who was diagnosed with autism at the age of four, attends one of the regular after-school social clubs.

Says Ste, “Training was miserable with the difficult weather conditions and the knee injury. I remember doing a 13-mile run a couple of months before and then a six-mile run the following day and it was extremely painful.”

Following some physiotherapy and running on soft ground, Ste was determined to keep going. “By that time the money had started to come in so there was no way I could back out of it,” he laughs. But he admits he was really worried that he might not make it. “The pressure was very much on.”

It was just three weeks before the big day that Ste managed to do a three-and-a-half hour run. “It was the longest run I had done, I managed 16 miles and I thought if I could just make it to 20 miles the last six miles would take care of themselves. It was the first time I believed I would actually be able to do it.”

Supporting Daisy Chain also inspired Ste to keep going. He and his wife Kim are passionate about how families affected by autism are supported by Daisy Chain. Zac has been attending for some time and this year his younger brother Max, two, has started to undergo the diagnostic process for autism.

“It’s very hard to consider that Max may be affected too. He doesn’t speak at the moment and it would be lovely to just hear him say ‘mum’ and ‘dad’. Also, you worry if you are being paranoid and seeing things that are not there because Zac is on the autistic spectrum. 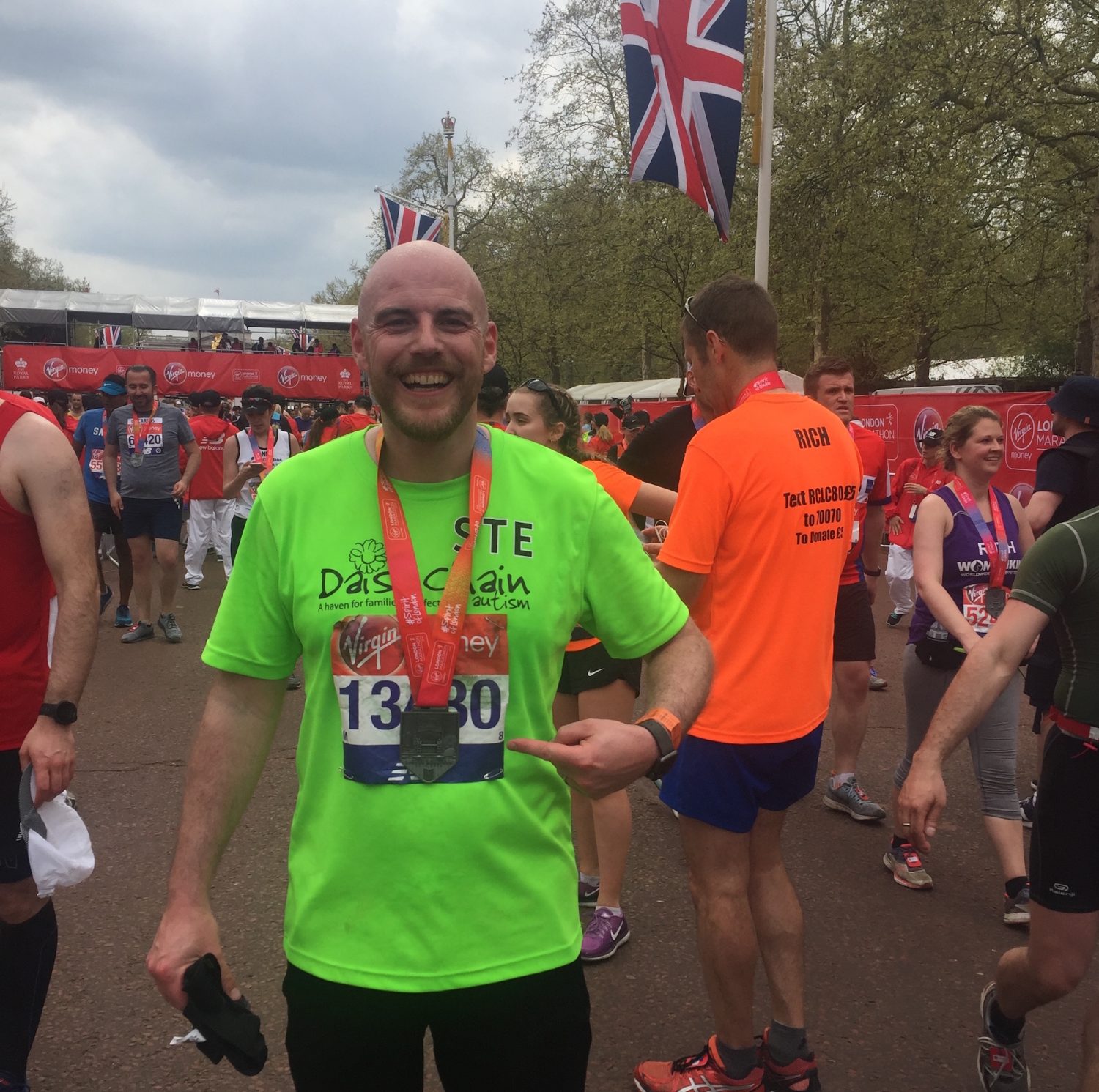 “Daisy Chain is very important to us. It’s somewhere we feel comfortable as a whole family. It’s relaxing to be in a place where everyone is understanding and you can talk to other parents who share techniques and strategies. Zac loves going to social club and his progress is fantastic with support from both school and Daisy Chain. I wanted to be able to give something back for that.”

Ste completed the course in 5:28. “I had planned to do ten minute miles but when I hit 18 miles the fatigue really set in. I felt like I was having to stoop over so I ended up running and walking the last bit.

“It was very hard but it was so worthwhile. The camaraderie on the day is amazing and it’s a fantastic atmosphere, I would recommend giving it a go. It’s also satisfying to be able to raise money for a cause close to your heart.”

Ste had lots of generous support from family, friends and colleagues at the Pets at Home stores he manages, helping him to raise the £5,000.

“I can’t thank people enough for supporting me and donating so I could hit my target.”

Katy Carmen, Daisy Chain fundraising and communications manager, says, “It was an amazing effort by Ste and a fantastic amount raised. We depend on the dedication and generosity of our supporters like Ste to raise vital funds to support our services for families affected by autism.

“The results of the ballot for 2019 are being released very soon so anyone who would like to make Daisy Chain their cause next year then please get in touch with us now on 01642 531248.”