Life has ups and downs for the Dore family from Darlington with ten-year-old Grace on the autistic spectrum with severe sensory processing disorder and older daughter Evie, aged 16, having ME.

Parents Rachel and Andy discovered Daisy Chain shortly after Grace’s diagnosis in 2017. “We just felt it was amazing,” says Rachel. “The staff are brilliant and are on hand to help with any issues that occur, like if Grace has any sensory problems.”

Grace adores the farm at Daisy Chain and at Christmas all she asked for was to join the Sponsor an Animal scheme and sponsor Dottie the pig.

Says Rachel, “Grace adores Dottie, she talks to her like she is human and can’t wait to visit her. I framed the sponsorship certificate for her as a Christmas present. She really does love Dottie the pig and getting photos with her.”

Rachel and Andy both attended a course for parents at Daisy Chain soon after Grace’s diagnosis and say that being able to get advice from an ASD perspective is invaluable. “When Grace has a particularly anxious time for instance, we are able to get into her head with the help of Daisy Chain. She sometimes cries because situations are too sensory for her and we are more able to understand and help Grace.”

Rachel and Andy were helping Evie manage the exhaustion that ME brings as well as looking after son William, now 13, when they began to notice that things were changing with Grace. 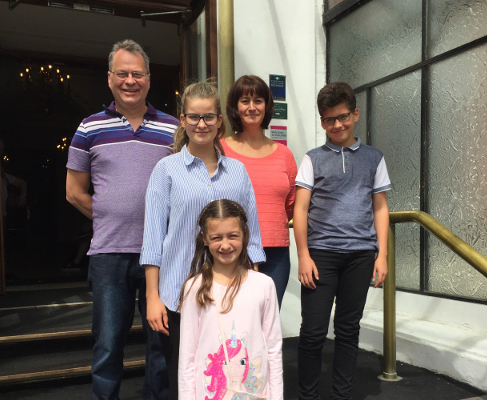 As parents, Rachel and Andy always thought Grace was quirky, very funny, describing her affectionately as “good value and fun”. But when Grace moved into year 3, things deteriorated quite rapidly. “Grace went downhill very quickly, we knew something was wrong and requested help from an educational psychologist.”

Soon after Grace’s diagnosis, Rachel received an upsetting phone call from the Autism Coordinator, “She told me that she had to let me know that Grace had broken down, opened her heart and told her how bad school was.

“At that time, Grace was really struggling and would break down uncontrollably at times. She couldn’t bear to see a car that had been in a car crash or a broken window, it was quite strange things which she just couldn’t cope with and would trigger a meltdown. We had theatre tickets booked for Mary Poppins in Newcastle, but when we got there she saw a homeless man and that triggered her so we struggled to get her into the theatre.”

Grace struggled so much in her previous school that her parents looked at a school with specialist provision. They wanted Grace to have the correct care in place and for her to be with staff that had a full understanding of how to support her within a learning environment.

Grace was diagnosed in August 2017 with Autism Spectrum Disorder and Sensory Processing Disorder. “One of the leaflets we were given at the diagnosis meeting was a Daisy Chain leaflet. We were encouraged to go along and see if Grace liked it.”

Rachel remembers “crying for weeks” after Grace was diagnosed with Autism Spectrum Disorder, “I was so upset and on top of Evie’s problems with ME.”

Grace moved school and has had one year at her current school with support in place. Says Rachel, “Grace has had an excellent school report and has passed all her exams. She learns in greater depth now and is so happy and content. We are very proud and thankful.”

“Daisy Chain has become a true haven for Grace, and fantastic support for us all as parents,” says Rachel. “It’s also been good in helping William understand Grace. Grace loves going to the Saturday Activity Days, it’s the highlight of her week.”

Recently, Grace attended her first holiday clubs which was a breakthrough, “Grace enjoys the holiday clubs and it means it is a break for us on the days she attends those,” Rachel explains. “Daisy Chain is a beautiful place, Grace loves the outdoor areas as well as the animals. It’s also run very professionally so you feel it is a very much a safe haven.”

Rachel and Andy now try and support as much as they can – Andy braved the freezing waters of the North Sea with a Boxing Day dip and Rachel, a childminder, puts on an annual children’s summer party raising funds for charity, so this year Daisy Chain will be one of the two chosen charities.

“We like to try and give back where we can,” smiles Rachel. “Daisy Chain has become so important to us and especially Grace that we want to do what we can to help.”