Young adults with autism can find it hard, if not impossible to socialise, so Daisy Chain organised a special autism-friendly comedy evening starring Britain’s Got Talent star Robert White – himself on the autistic spectrum.

Robert White was runner-up in the 2018 BGT series and he wowed audiences with his witty musical routines. He describes himself as the only gay, aspergic, quarter-Welsh comic on the British comedy circuit. He is also winner of The Malcolm Hardee Award for Comic Originality at the Edinburgh Fringe.

He was joined on stage at The Arc in Stockton by Harriet Dyer, a full-time stand-up comedian who often focuses on mental health issues and runs a comedy / storytelling night in Manchester where most of the acts and audience have mental health issues.

Also in the line-up was Compere Mark Simmons, an exceptionally witty one-liner comedian with a growing TV presence and Daryl Johnson, a 17-year-old autistic comedian specialising in traditional and slapstick style comedy with a fun musical element who has been a regular user of Daisy Chain’s services for a number of years. 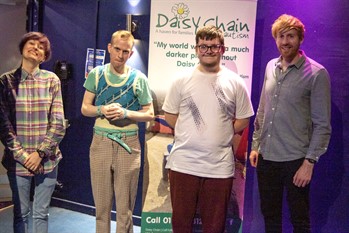 The night was designed to give young autistic adults a taste of attending social events in a bid to raise their confidence in socialising. Around half of working age people are chronically lonely in Britain with those with autism four times more likely to be lonely.

The autism support charity was given £100,000 in 2019 by players of People’s Postcode Lottery to tackle loneliness and isolation in young adults with autism in the Tees Valley.

Neeraj Sharma, Daisy Chain chief executive, explained: ‘Consultation with parents and carers of young adults who access Daisy Chain services showed us there was a need to help widen their social experiences. Many young adults with autism find it hard to cope with mainstream social activities without any practice of how to interact on such occasions. This autism-friendly Comedy Night was designed to give them that experience but in a controlled environment so they could understand what to expect and take some of the stress out of attending a social event.

‘We are extremely grateful to players of People’s Postcode Lottery for helping us to fund activities that will support people to engage in social activities which help dispel feelings of loneliness which in turn can lead to serious mental health issues.’

Hayley Matthews, Head of Adult Services & Safeguarding, added: ‘It was brilliant to see our young people come along and enjoy a night of comedy at the Arc in a mainstream venue that they may otherwise not access. Taking part in social activities helps them gain confidence and social skills which helps them in all areas of their lives.’

Daisy Chain service user Laura Moorsom said, “I really enjoyed it. Robert White was funny. Daryl was really good as well. I thought Harriet was good when she was talking about the driving and also when she said about trying not to care when people call you names. I liked that.’

Robert White added: ‘The isolation and the introversion of the whole of my childhood and particularly my teenage years was just mammoth. You feel it so much more acutely then because everyone else is doing stuff. I think a comedy night for young adults with autism is a great thing to do, I think the more events and environments that can be geared towards them the better.’