Little Rhodri Sharp took on a very big challenge while raising funds for Daisy Chain along the way.

With his family, the nine-year-old completed a 185-mile bike ride along the Hebridean Way which stretches along the length of the Outer Hebrides from Vatersay in the south to the Isle of Lewis in the north.

The 185-mile route takes in 10 islands, six causeways and two ferries and Rhodri and the Sharp family did it all in six days – mostly in the pouring rain but they persevered and raised over £350 for Daisy Chain.

Both Rhodri and his 12-year-old sister Eleanor carried all their own kit on their bikes making it a tough physical challenge riding up to 41 miles in one day alone.

Parents Katie and Rob said they wanted to take on a challenge as a family and cycling is a firm favourite, ‘So Rob found probably the most challenging cycle ride that could be found,’ Katie laughs.

Rhodri chose to raise funds for Daisy Chain as it was the chosen charity of his year at Prior’s Mill Primary School in Billingham. 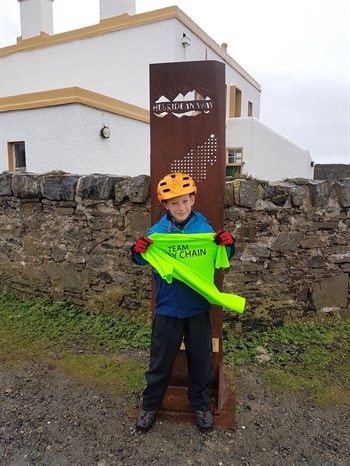 The family carried all their kit on their bikes including tents and cooking gear. Katie explains, ‘We had intended to wild camp but we ended up changing our plans and pitching up on campsites because we needed to be able to dry out. We only had one day where we didn’t have to wear waterproofs. One day we did about 40 miles, it rained all day and there were 40-mile-an-hour headwinds. We had to ride in formation to protect the children but they never complained throughout the whole trip.’

Rob adds, ‘We did a lot of training before the challenge. We completed a 30-mile loop every week for four weeks before we set off for The Hebrides.

Rhodri adds, ‘It was a very exciting trip and it was a lot of fun doing it and raising money for Daisy Chain. We called it our chocolate and cake trip because of all the things we got to eat to give us energy.’

Katie says, ‘We met some lovely people along the way who helped us, even fed the children when we got to the ferry terminal and there was nowhere to buy food. Someone even donated when they learned the children were doing it for charity. It was an amazing experience.’