Today’s event was held at Inspire to learn at South Bank and opened with a speech from Police and Crime Commissioner Barry Coppinger. As well as offering a chance to network attendess also undertook a training session delivered by experts from local autism support charity Daisy Chain and began to formalise ideas and plans for growing and developing the network. 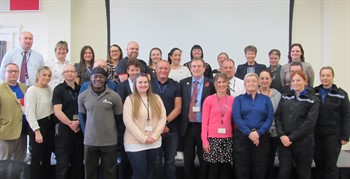 The Cleveland Police Autism Association set up an intranet site earlier this year, intended as an initial point of reference, but the network also plans to create a Champions’ Forum and a Twitter feed, and to publicise social events, seminars and workshops.

‘I’ve been a member of the National Police Autism Association since early 2017.  It’s, a UK wide network of police officers and staff from the country’s 43 forces and they raise awareness of autism in all its forms and work to create a level playing field for all staff to develop and grow in policing – whether they’re on the Autism Spectrum or not.

‘From the outset, it was clear that autism was a largely misunderstood condition. And yet, I had met various people across the organisation who were living with autism themselves, or caring for others that are. It appeared to me there was a real need for a staff network within Cleveland Police.

‘Two years later, I became the NPAA Cleveland Branch Coordinator and, with my colleague Peter Lillie as Deputy, we provide strategic and day to day governance and administrative duties on behalf of the CPAA.

‘The Association is a formal member of the Cleveland Police Staff Network Association; it actively supports the Everyone Matters Programme, and engages with other staff networks and forums wherever and whenever it can.

‘The Association is very much in its infancy, growing a little each day and having read all the expressions of interest for Autism Awareness Champions, it’s very clear that autism affects all of us in varying degrees, whether through personal experience, from caring for family and friends or though meeting the public and the communities we serve.

‘It’s heartening to discover so many people within Cleveland Police feel so passionately about the subject and want to take positive action to support colleagues and the public who are on the Autism Spectrum, as well as to raise awareness of autism.’

Pauline Wright, Daisy Chain training manager, said: ‘We were delighted that Daisy Chain was approached to offer autism awareness training to Cleveland Police’s Autism Awareness Champions. Autism is very much a hidden condition so awareness and understanding of how it affects people is vital.

‘It is particularly important to emergency services who often need to deal with situations which may be distressing and this can be heightened in an individual with autism who may not react in a typical way. It’s brilliant to see Cleveland Police growing their knowledge of autism and supporting a network of champions throughout the force to increase that awareness.’

For more information on our autism awareness training, please contact the Training Team on 01642 531248.