Daisy Chain is delighted to have been awarded an amazing £10,800 from the Co-op’s Local Community Fund.

The amount has been raised over the last 12 months thanks to the Co-op and local shoppers. Supporters joined up as a member of the Co-op for £1 and then chose Daisy Chain as the charity they wanted to benefit.

Every time members shop at the Co-op, bought selected own brand products they earned 5% members’ rewards back to spend as they wish and a further 1% was donated to their chosen charity.

Anyone living within a 15-mile radius of Norton Co-ops, both food and funeral services, could choose to support Daisy Chain.

Included in the grand total was money raised from the carrier bag levy.

Steve McGowan, Norton Co-op store manager, said: “It’s part of the Co-op’s ethos to support the local community. The Co-op is owned by its members and it’s important that the members and their community benefit from that. We do a lot of charity fundraising in store and we raise awesome amounts. As manager, it is my mission to ensure everyone who comes through our doors benefits from Co-op membership.”

Angela Dee, Daisy Chain community fundraiser, added: “It was a real privilege to have been chosen to benefit from the Co-op’s Local Community Fund and to be awarded such a fantastic amount. We support families affected by autism in the Tees Valley and as a local charity we depend on the community to support us.”

Co-op members have helped raise over £20m for local causes close to where they live. 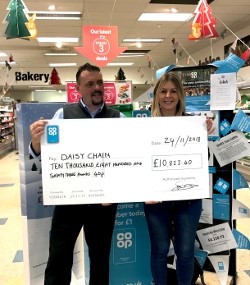