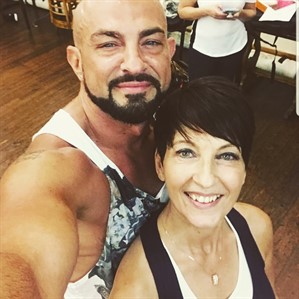 Daisy Chain patron Anna Kennedy OBE will be donning her dancing shoes again and taking to the stage in her home town.

Anna, who is a prolific campaigner to raise awareness of autism, will be back on Teesside to dance with her Strictly Come Dancing partner Robin Windsor at Middlesbrough Theatre on Monday October 22.

Robin is performing a farewell tour after a long and successful dancing career during which he spent five years on the BBC’s Strictly Come Dancing show.

Anna Kennedy will be joining Robin once more to dance the Charleston which was a huge hit on The People’s Strictly for Comic Relief receiving a perfect score of 40 from the judges.

With her first dance at Middlesbrough Theatre when she was just five and a member of Cleveland Academy Dance School, Anna is looking forward to returning.

Anna became patron of Daisy Chain in 2014 to help boost the profile of the charity and awareness of families affected by autism.