It seemed like a good idea at the time when two Visualsoft employees visualised a mammoth challenge – an 84km / 50 mile run.

And it turned out to be a really excellent idea as they raised £1,150 for Daisy Chain from their colleagues at the Stockton digital agency of eCommerce specialists.

Darran Matthews, 37, and Sam Kent, 35, decided to undertake the feat after Sam sent Darran a random text asking if he would like to do an 80k run on one day and Darran decided it would be interesting to ‘see how far he could go’.

The suggestion became reality and together the pair ran from Dufton in Cumbria, where Sam’s parents live, across the Pennines following the Teesdale Way to finish up at Sam’s home in Darlington. 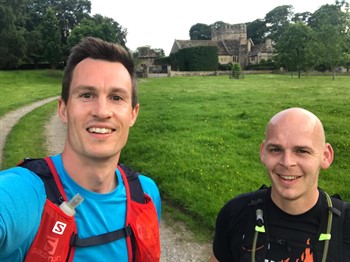 There was some pretty tough terrain along the way with steep ascents and undulating ground along the riverbanks but the pair persevered with their two-marathon trek which took them just over 15 hours.

Darran only decided a day before the run to raise funds for Daisy Chain and mentioned it to his co-workers in Visualsoft who gave generously. Darran’s wife Hayley works at the charity as Head of Adult Services and Safeguarding so he was very aware of the support offered to families affected by autism across the Tees Valley.

Partnership manager Darran and Project Manager Sam both have young families but say they were very supportive of the challenge and their after-work training.

However, both deny any particular love of running, ‘I hadn’t even run a marathon before,’ Sam admits. Darran adds, ‘I had run 10ks and half marathons but preferred playing football and going to the gym rather than running. I found long distance running really hard.’

Sam explains, ‘Parts of this course were far from smooth, sometimes we were actually hopping from boulder to boulder. We split the course into three sectors with the second sector the shortest but that was the hardest with the climbing, it took so much longer than we expected it to.’

Both agree it was a fantastic achievement, ‘And there were some brilliant views,’ Sam adds. ‘Though my wife Rebekah thought I was crazy to even consider doing it.’

Raising awareness of Daisy Chain within Visualsoft was also a bonus. Darran says, ‘It was great to talk to people about Daisy Chain and explain what the charity does. It was really heart-warming how much people were willing to pledge and the level of engagement when it came to collecting the money in.

‘The beautiful thing about Daisy Chain is that it is there for people when they need it, when they start a diagnosis of autism and they don’t know what to do, they can contact Daisy Chain.’

And what will the duo do next? There’s definitely something on the cards but for the moment they are playing those cards close to their chests. Watch this space.