A North East based martial Arts group has this year hit new heights in its fundraising challenge.

Dynamic Aikido North East, based in Darlington, chose the Cleveland Four Peaks Challenge – rising to a grand combined height of around 3,900 feet.

The Cleveland 4 Peaks is a 13-mile loop which takes in Roseberry Topping, Captain Cook’s Monument, Codhill Heights and Highcliff Nab.

Enthusiastic club members from the region, a total of 23 and four dogs completed the challenge in the eight hours limit. 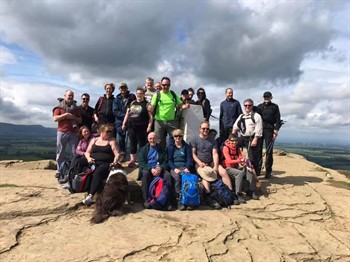 Together they raised over £1,400 for autism support charity Daisy Chain based in Stockton. Daisy Chain currently supports over 2,300 families affected by autism across the Tees Valley.

Jason Hartigan an instructor from the Darlington club has long been a corporate supporter of Daisy Chain through the charity’s business network Friends of Daisy Chain.

Jason says, “We are a North East based group and we hold regular instructor meetings, we wanted to support a local charity, so I suggested Daisy Chain.

‘The camaraderie, stories and jokes along the way made it a very special and enjoyable day. A great sense of achievement was felt by all those who took part.

‘We set a high bar for future events by raising an incredible £1466. Thanks go out to everyone who supported the event and all those who took up the challenge on the day.’

Details about the group can be found on their website.