Ethan is a model customer for Heron Foods

Five-year-old Ethan McQuade-Jones loves the Heron Foods stores and Lego – so much so he has been building a replica model of the store and parade of shops near his Norton home.

The family posted his achievements on social media and Heron Foods were so impressed with young Ethan that they sent him a goodie bag complete with apron, badge, staff lanyard and a sign for his Lego model.

Ethan, who is suspected to be on the autistic spectrum, was delighted with response. Mum Gemma explains, “Ethan was very interested when building work began on the store even before he knew what it was going to be. He enjoyed watching it being constructed and then insisted on going to the opening. Then he built the model which we shared on social media with the store and they were so lovely. Their response was brilliant and Ethan is so pleased with his gifts.”

Ethan, who regularly attends Daisy Chain with his family, is currently undergoing diagnosis. Mum, Gemma and Dad, Darren began to think there may be issues before Ethan was two. Despite initially beginning to speak and learning to say ‘mum’ and ‘dad’ his speech then suddenly stopped. He was a very placid baby who made little noise and rarely even cried.

Says Gemma, “I was taking Ethan to play groups where I noticed he was different. He would flap his hands, for example, but I just thought he was excited. I was asking the health visitors there what they thought and if there was anything we could do.”

Eventually, they were referred to speech and language therapy who suspected possible autism. Gemma says, “We didn’t know anything about autism. We had Googled why our child might not be talking and autism came up. We recognised some behaviours such as hand flapping, foot tapping and lining up toys which Ethan did but then he had really good eye contact so we weren’t sure.”

When they saw a paediatrician, who was of the opinion Ethan had high functioning autism, Ethan was referred for diagnosis.

Gemma explains, “We got the result from the paediatrician in October 2016 right on our daughter Tamzin’s thirteenth birthday. It’s something I will never forget.”

The family began to attend Daisy Chain with Ethan going to the Wednesday toddler group, Gemma and Darren joining the Links parent support group and the whole family going to the Saturday activity day.

Gemma says, “We were a family who knew nothing about autism but through coming to Daisy Chain and talking to the fabulous staff, meeting the other families and attending specialist talks, it has helped us understand Ethan’s behaviours and shown us how to help him.

“Ethan loves coming to Daisy Chain as does Tamzin. He loves the trains and the sand table while Tamzin loves the animals – she wants to volunteer in the barn when she is 16.”

Being able to attend Daisy Chain is hugely important to the family. “I don’t take Ethan out to anywhere mainstream on my own. He can get very upset say if another child comes up to him and wants to play with him or whatever he is playing with and then people just look at you. At Daisy Chain, no-one stares at you as though you can’t manage your child.”

Darren adds, “Everyone at Daisy Chain is in the same boat. People know what to say and what not to say whereas elsewhere people can make the situation worse. It’s great going on the holiday trips with Daisy Chain because you know staff from the charity are there so there is help on hand if you need it.”

Gemma explains that they have had difficulty visiting mainstream attractions on their own, having to wait to be able to access enhanced facilities and provide all the evidence needed.

“It’s hard also because Ethan does not yet have an official diagnosis of ASD, we are still having to wait for that. It would open up more opportunities and support for us to have the diagnosis and it would also be a relief to simply know, one way or the other. It feels like being in limbo not knowing.”

At the moment, while they can access some of Daisy Chain’s services, some services are not available without an ASD diagnosis such as the after-school social clubs including Sibz for siblings.

“We would always like to have more of Daisy Chain,” Gemma smiles. “It’s such a safe place for Ethan as he has no sense of stranger danger. At Daisy Chain, he can move about freely and you know he will be safe.

“Having Daisy Chain practically on our doorstep has given us a great opportunity to educate ourselves on autism, which has helped us educate our family and friends about it as they also didn’t have a clue about any of it.

“Daisy Chain has been a massive help and support to our family and for that we will always be grateful. We feel extremely lucky to have a place like Daisy Chain on our doorstep.” 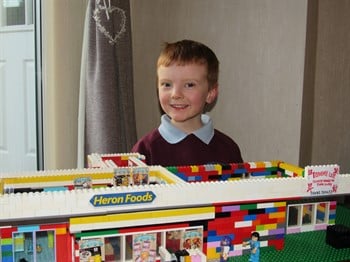