A fund set up by former Middlesbrough FC player Colin Cooper and his wife in memory of their son has made a five-figure donation to help a local autism charity.

Since the Finlay Cooper Fund was established, it has raised more than £625,000 and helped in excess of 120 children’s causes across Teesside.

After deciding it was the right time to wind-up the charity, the Coopers have now passed on Finlay’s amazing legacy to help other local children.

A £50,000 donation was made to Daisy Chain, a charity which supports families affected by autism across the Tees Valley. 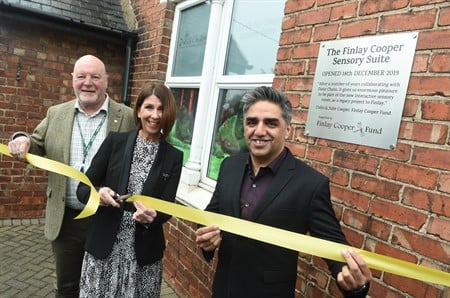 Julie Cooper said, “We are so proud and moved to have made Daisy Chain’s new sensory room a reality as a legacy gift from the Finlay Cooper Fund.

“Through this wonderful facility and all those who benefit from it, our son Finlay’s name will live on for many years to come.”

“This life-changing amount of money has allowed us to build an amazing new sensory room that will help improve the lives of local children with autism. We would like to say a huge thank you to the Finlay Cooper Fund.”