Have a Ball and help Daisy Chain

The job scene can be particularly bleak for adults on the autistic spectrum so Daisy Chain is adding an employability theme to this year’s annual Winter Ball.

Guests at the event on Friday November 24 will hear from the family of Terry Bergin, who have seen a huge change in him since he started a work placement in the charity’s Superstore on Portrack Lane, Stockton.

Terry’s grandparents, Tony and Beryl Brown from Middlesbrough, will be giving a short talk on how Daisy Chain has improved his life over the last year and Terry himself will be adding his thoughts. 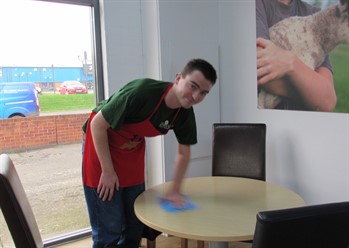 Diagnosed with Asperger’s and associated learning difficulties at the age of four, Terry and his family only came into contact with Daisy Chain just over a year ago. Terry is now 26.

Mum Kathy explains, “We had no idea Daisy Chain existed when Terry was younger which is a shame. Terry has been a different person since he started working in the coffee shop. He loves going in and even volunteers an extra morning a week because he enjoys it so much.”

Growing up, Terry struggled with school as so many children with an Autism Spectrum Disorder (ASD) do but, coming from a musical family (Mum and Grandma both talented musicians and music teachers), he achieved a place at The Royal Northern College of Music in Manchester and completed a degree.

However, at 17 Terry suddenly began to suffer with epilepsy and the medication makes him very tired so for the moment, Terry can’t pursue a career in music. “It’s yet another thing he has to deal with,” Kathy explains.

Tony adds, “Daisy Chain really helps. It has given him something to do, a purpose.”

All the family agree that applying for jobs and not getting anything is a very depressing scenario. Kathy says, “We got in touch with Daisy Chain and Terry decided to try working in the coffee shop, he really likes it and has improved a lot. All the staff at the superstore are very good with him, very upbeat. He can now make all the coffees using the machine.”

Tony smiles, “When we pop in to collect him we see him being very professional, enjoying talking to the customers, he’s lovely with the customers and enjoys meeting them. It’s a supportive environment for him.”

The family agree that Daisy Chain has helped to turn Terry’s life around, “It was a difficult time for him before he started with Daisy Chain, Terry wasn’t happy, he wasn’t in a good place. Now he feels like a worthwhile, valued member of society. It has reminded him of the many things he can learn to do as he would really love to have a job,” says Kathy.

Tony and Beryl will be talking with Terry about Terry’s journey with Daisy Chain at the Winter Ball at Hardwick Hall Hotel. Places cost £60 including drinks reception, three course dinner, live entertainment and a disco. There are still some tickets available – places can be booked at https://www.daisychainproject.co.uk/Event/winter-ball-2017