Huge Thank You To All Daisy Chain Supporters 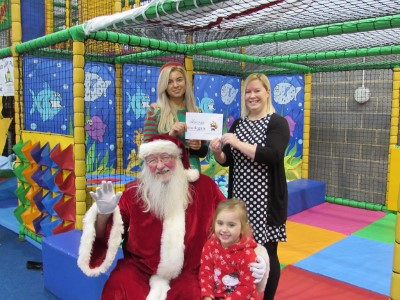 Daisy Chain would like to say a huge thank you to everyone who has rallied round to offer support and donations after the recent break-in to our Day Centre at Norton.

Castlegate Shopping Centre brought Santa to the Day Centre to donate £200 from the funds raised from the centre’s grotto.

Supporter Anthony Puckering started a Just Giving page to replace the stolen funds and has already raised almost £700. Other champions including our corporate supporters have also joined in to raise money.

An anonymous donor who has used Daisy Chain services in the past called into reception and made a donation of £200 because he was so concerned that families should not be affected by the loss of funds.

Chantal Taylor, marketing manager at Castlegate Shopping Centre said: “We were all appalled to hear that Daisy Chain had suffered a burglary and so close to Christmas. We have worked with Daisy Chain before so we immediately wanted to donate £200 from the donations to our Santa’s Grotto to help the charity and support the amazing work it carries out.”

Stuart Dexter, chief executive of Daisy Chain added: “We have been overwhelmed by the generosity of supporters who were horrified that we were targeted and funds stolen.

“Everyone at Daisy Chain is extremely grateful for the swift and heartfelt support that so many people have offered. We are constantly bowled over by how many people out there have taken us to their hearts and offer so much help. Thank you.”