Athletic Jake Armstrong is so fast on his feet that his family and friends call him ‘Turbo’.

When he decided to put his talents to good use and run the Great North Run, there was one charity that stood out for him and his family – and that was Daisy Chain.

Jake is on the autism spectrum and mum and dad, Debbie and Steven, believe Daisy Chain has played a huge part in his development. Says Debbie, ‘Daisy Chain has been brilliant for Jake. He wouldn’t be who he is today without that support so we really wanted to give something back.’

In September 2018 Jake ran his first Great North Run with a time of one hour 50 minutes. He also inspired a team from his gym CrossFit in Hartlepool to join him. Individually he raised over £600 and his team over £2,000. 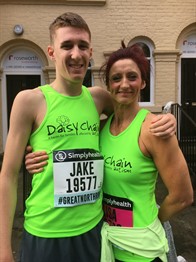 Working out in the gym and training for the famous half marathon also helped Jake build a mental discipline and toughness. Debbie explains, ‘It’s really brought Jake on. As a parent, you can’t help but worry about the future of your children and you need to find activities that will help them develop social skills. It’s particularly difficult when you have a child who is autistic so it was amazing to see Jake grow in confidence.’

Jake’s parents began to notice subtle differences in their son’s behaviour when he was three years old, especially a lack of interaction with other children. Debbie says, ‘When he started primary school we immediately started getting reports back that he didn’t concentrate or listen. It was when we went to visit and there was a new teacher there, she mentioned his autistic traits and that was the first time autism was mentioned. Jake was eventually diagnosed when he was seven years old.’

The family moved back to Hartlepool to be closer to relatives and were given a leaflet for Daisy Chain. ‘I went along and spoke to a member of staff, I think I just cried for an hour-and-a-half, Debbie recalls. ‘I got a lot of information and advice as well as getting Jake started at social club and attending activities days. We got a lot of help on how to reduce Jake’s anxieties about going on holiday. We had been away to Cyprus and it was nightmare holiday with Jake having panic attacks so we got some help with his anxiety. Life did need to be regimented for a while, explaining what we were going to do and what was going to happen at each and every stage.’

Debbie describes Jake’s confidence being at ‘rock-bottom’ when he first came to Daisy Chain but when he returned to donate some money they had collected during an ‘autistic work-out’ to raise awareness of autism, the staff were delighted to see how far he had progressed.

And the family’s relationship with Daisy Chain continues as Jake is to start a supported work placement in the charity’s Stockton Superstore to gain skills to help him get work. Currently Jake is at college and intends to move on to study film and media at the Northern School of Art in Hartlepool (formerly Cleveland College of Art and Design). He has also just passed his driving test which is another fantastic milestone on his road to success.

‘I don’t know what we would have done without the support we had from Daisy Chain along the way,’ Debbie concludes.

If you would like a place with Team Daisy Chain in the 2019 Simplyhealth Great North Run you can call us on 01642 531248 or book online at https://www.daisychainproject.co.uk/Event/great-north-run-2019