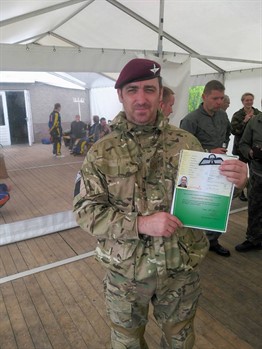 A charity fundraiser has taken on an extreme challenge to raise funds for autism support charity Daisy Chain and says he was “blown away” by the experience.

Jason Hartigan, a former member of the parachute regiment, wanted to do something special to celebrate his fiftieth birthday and decided to relive his youth as well as raise funds for Daisy Chain.

Now a business development sales manager, Jason has long been a corporate supporter of the Stockton charity, and after three Great North Runs he decided he wanted to give his knees a rest and do something different.

He undertook a round canopy military style parachute jumps course, which he had to travel to Holland to take part in as such jumps can no longer be carried out in the UK.

As part of the course, run by the Pathfinder International Parachute Group, based in Teuge in Holland, Jason did five static jumps and completed the course.

Jason said: “I loved it. I didn’t really know what to expect. I was apprehensive, a bit anxious but I have to say the course was run very professionally by Roy Mobsby, a former Paratrooper jumps and operations co-ordinator. We completed theory in the classroom, ground training and all the safety and emergency procedures, such as what to do for main canopy failure and reserve parachute drills, followed by a written exam.

“I jumped out of a Cessna 308 at 2,000 feet. After three jumps, you gain your Pathfinder basic wings and certificate which are club wings. On completion of the fifth jump, you are awarded Dutch Basic military wings which is a recognised Military Order.

“I was totally blown away by the experience and by the great support from my wife, family and close friends as well as work colleagues, local businesses, and my local Aikido club who all helped raise funds for Daisy Chain.”

Jason added: “It was an amazing feeling to take that step back in time and feel the camaraderie. I was the only British person on the course, the rest were from Poland so the jokes didn’t always translate, but there was great enthusiasm for the sport they loved. We had one barn roof and two tree landings but everyone completed their five jumps. We also got the opportunity to pay our respects at the Arnhem war graves and the Airborne museum.”

Stuart Dexter, Daisy Chain chief executive, said, “It’s great to see people can combine achieving something which is really important while raising funds at the same time. Our thanks to Jason for raising over £500 for us to support families affected by autism. I hope others are inspired by his creativity and can see how fundraising can be adventurous and action-packed.”