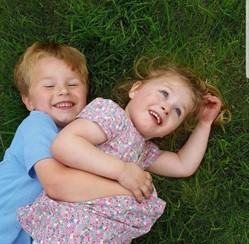 Little Lewis Breary loves running, so he has decided to combine it with his love for his little sister Lily, who has autism, and raise funds for Daisy Chain which supports the family.

Lewis is to run the inaugural mini Simplyhealth Great Tees Run in September in Stockton and he has already beaten his fundraising target of £150.

Mum Amanda says it was very clear from an early age that Lily had autism, “When she reached 12 months, it was obvious she was not reaching her milestones – not clapping or babbling. I was a nursery nurse working with babies so it was clear to me. By 18 months Lily still wasn’t feeding herself; she ignored everything around her, especially other children, even Lewis wasn’t on her radar, she preferred to be with adults. She rarely played with toys and had no understanding of anything around her or of the spoken word, no understanding of danger either.

“We asked for an early two-year check and then started on the path to diagnosis. Lily was diagnosed by the time she was three. It was so clear, Lily presents more like a boy with autism, it is very obvious with her, not hidden like it is often typically believed to be with girls on the spectrum.”

Lily currently has little speech and is considered between non and pre-verbal, but now at five she can say “mummy” and “daddy”. She has always loved to sing and over the years, the babbling has changed to clearer words. Amanda says, “At one point in Lily’s life, myself and Jamie wondered if she would ever speak so listening to her singing and saying Mammy and Daddy is amazing.”

Lily and Lewis have a strong sibling relationship and that has been helped by Daisy Chain. Amanda explains, “Lily was three when we first went to the farm but she struggled with the busier Saturday activity days. When the high needs sessions started that was ideal for us. Both Lewis and Lily love to go to Daisy Chain, they love the soft play. They are both very lively so it is a great place for them to work off some of their energy.

“Lewis enjoys the holiday play sessions too so when we saw the new run advertised, Lewis wanted to raise money for Daisy Chain because the charity helps lots of children like Lily and their families. Daisy Chain is a brilliant charity; for so long Lily was locked in her own world but slowly she is improving. It’s a lifeline for so many families and I am so proud that even at just six years old, Lewis wants to give something back.”

Lewis will be running in the mini 2k along the banks of the River Tees on September 8. You can donate on his Just Giving page at https://www.justgiving.com/fundraising/lewis-breary