Al Devon, a music promoter and former band member of Hartlepool band The Jar Family, wanted to showcase new musical talent as well as raise funds for charity. He chose Daisy Chain because autism has affected his family – his nephew has a diagnosis of Asperger’s Syndrome.

Also, while growing up Al’s mum offered foster respite care to children with differing needs so he understands the ongoing support families need.

Live Music for Autism is on Sunday December 15 at Stockton’s Georgian Theatre and features a number of bands including Newcastle band The Escapades, indie band The Barratts from Northampton, The Lulas a high energy upbeat funk infused pop band from Middlesbrough, an up and coming young rapper from Wakefield S Dog and The Tinny Bennett Band. 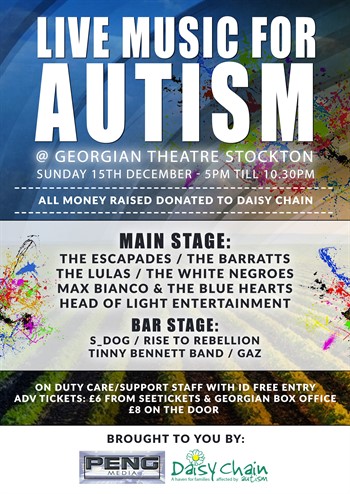 Al says, ‘It’s going to be a great festival of live music and a fantastic opportunity to see some of the best up and coming talent in the music industry as well as established local bands in a brilliant venue. I want to be able to showcase these great bands and raise money for a local charity which does amazing work, at the same time.

‘When I was looking for a charity to support I could see all the brilliant work Daisy Chain does to support local families and people with autism. I was blown away by what Daisy Chain offers so I wanted to be able to support that work in the local community. People can see the benefits at grass roots.’

‘Everyone is behind the event and looking forward to raising funds for Daisy Chain,’ says Al.

Live Music for Autism tickets are on sale for £6 and can be bought on the See Tickets website.