Nortech Group’s Corporate Social Responsibility Initiative, Nortech Cares, has established a new relationship with Daisy Chain to support the local charity as part of its ongoing commitment to community causes.

As the company’s nominated charity for the next 12 months, Nortech Cares will support Daisy Chain with fundraising activities and also donate the time of some of Nortech’s employees. In addition to an Annual Charity Golf Day & Shoot, in which this year’s proceeds will be donated to the Norton-based charity, there are other upcoming events such as an Afternoon Tea event at Rockcliffe Hall on May 10th.

Previously, Nortech has raised over £10,000 for charities in the Teesside area alone. The company has also raised money for a terminally-ill former colleague, through a 285-mile cycle from Wynyard to Aberdeen, and £500 in equipment for local girl Nell Ramsay, who was diagnosed with Rett Syndrome.

Nortech Director, Elaine Bunn, manages the group’s CSR activities, as well as the work it conducts with schools and universities, to support science, technology, engineering and maths subjects. The company sources local opportunities, in addition to ideas from Nortech clients, staff and family combined with projects outside of the UK, to represent the support of its office in Abu Dhabi, and its growing global presence.

Daisy Chain, which was first established in 2003, was created by Lesley Hanson whose son Jacob was diagnosed with Autism at an early age. Today, the charity helps more than 1,800 families in the Tees Valley, supports 611 children each week and provides around 293 hours of respite per week.

“Daisy Chain is a great charity that has been delivering fantastic services to local families for almost 15 years, so I’m thrilled that Nortech will continue to contribute to this wonderful cause.”

Stuart Dexter, Chief Executive at Daisy Chain added, “Without securing donations and fundraising with the help of individuals and companies such as Nortech, running Daisy Chain wouldn’t be possible and for that we are very grateful.

“With continued support, the aim is further develop our services and facilities to coincide with the growing needs of our families, for which Daisy Chain is a much-needed haven.” 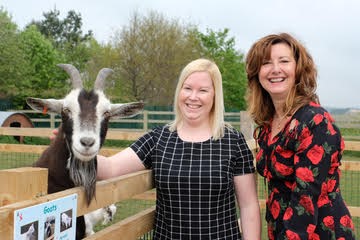