Pub staff clock up miles and funds for Daisy Chain

Pub staff from The Isaac Wilson put on their walking boots and undertook a sponsored walk for Daisy Chain.

Staff at the Middlesbrough pub have been longstanding supporters of Daisy Chain since a young relative of a colleague was diagnosed with an Autism Spectrum Disorder.

After notching up 13 miles of the Cleveland Way last year, this year they ramped the mileage up to 17 but chose a flatter route along the old railway track from Robin Hood’s Bay to Scarborough.

Kitchen manager and keen walker Lindsey Rigg, organised the event and 12 staff took part all in a bid to raise funds for Daisy Chain. 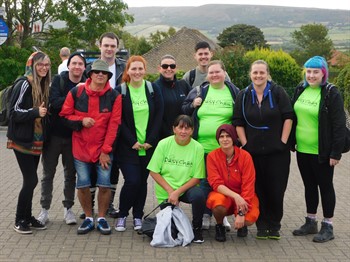 Lindsey says, ‘I am really proud of all of them. Everyone is at different levels of fitness and it’s not every day you commit to walking a long distance but everyone completed the full walk. Some people even had previous injuries but they were so determined to do it for Daisy Chain that they wouldn’t let anything put them off.

‘It was also great for team building because when you are busy at work it’s not easy for the kitchen and bar staff to have much time to talk. The sponsored walk gives us a chance to come together, it’s good for morale, it gives us something to talk about and everyone has a real sense of achievement.’

One of those team members was Jackie Parnaby, who jokes that she nearly collapsed when she heard it was a 17-mile walk but she still managed to race the last leg and be one of the first two to make it to the finishing point pub in Scarborough.

‘It was good that it was flat,’ says Jackie. ’But Lindsey still made us climb down a hill through nettles to visit an abandoned train tunnel, she always likes to make things a challenge for us,’ she laughs.

This year’s walk raised £782 for Daisy Chain and the team are now planning to Wear It Festive at Christmas to keep on raising funds.

‘We all know what an important charity it is as we have seen first-hand the difference it makes to families when they get an autism diagnosis.’