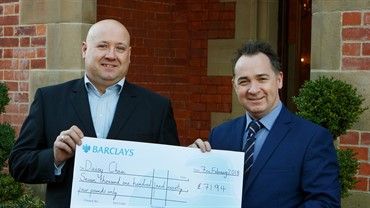 Rockliffe Hall’s Chief Executive, Eamonn Elliott, presented a cheque for £7194 to Stuart Dexter, CEO of Daisy Chain, marking the end of a year’s fundraising for the charity at Rockliffe Hall.

Daisy Chain was the nominated charity for Rockliffe Hall in 2017. The hotel’s staff raised money through a range initiatives, including the Great North Run, and guests were also invited to make a voluntary donation to the charity when they checked out.

Eamonn Elliott said: “We are delighted to have linked with Daisy Chain as our nominated charity for the last year and I’m so pleased to be able to present this cheque to Stuart today. Rockliffe’s staff and guests have enjoyed helping raise money for such a worthwhile cause.”

Stuart Dexter said: “I am thrilled to accept this cheque from Eamonn and the team at Rockliffe Hall. Daisy Chain benefits greatly from linking with organisations in the North East and we are always grateful for Rockliffe’s support.”