Among the teams who battled it out to win the annual Daisy Chain Boat Race this year was an eight-strong group from Billingham Synthonia FC first team managed by Boro legend Jamie Pollock, who has signed Love Island and Geordie Shore reality TV star Sam Gowland.

It was the first event in a fundraising partnership which saw the Synners adopt Daisy Chain as their chosen charity and also signed a three-year deal to play at the neighbouring Norton Sports Charity.

Paul Dolan, Synners Club Secretary, said, ‘As a club we want to be involved with the community and build partnerships. Daisy Chain seemed an ideal fit for us as we are currently neighbours being based just down the road at Norton Sports Charity. We thought the Boat Race was an ideal event to kick-start the partnership, getting the team to work together, increase their fitness as well as raising funds for such a worthwhile cause.’ 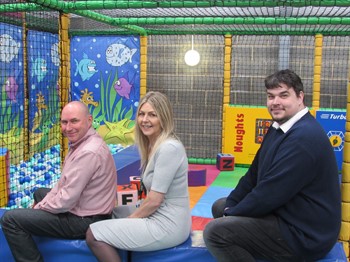 Founded in 1923, Billingham Synthonia found themselves with nowhere to play when their stadium in Billingham was sold in April 2017 due to unsupportable running costs. Now the club is roaring back on to the Northern League scene under the management of Jamie Pollock.

Coach Paul is now on the committee and has also been joined by volunteer social media manager Jay Wathey. The pair are as passionate as Pollock about making Billingham Synthonia a footballing force to be reckoned with.

Paul has played football since he was a child and is a committed coach while Jay used to go to Billingham Synthonia’s ground to watch matches as a child accompanied by his grandad.

Says Jay, ‘I always thought I could personally help make a difference and now Jamie has given me the opportunity to do that.’

Paul’s right hand man when he worked for an asbestos removal firm was on the autistic spectrum so he has an understanding of the condition and when Billingham Synthonia wanted to partner with a local charity, he immediately thought Daisy Chain was the perfect fit.

‘It offers us lots of opportunities for team building away from the pitch through challenge events but also through social events like the annual Winter Ball,’ he explains.

‘We also want to be as accessible as possible to young players, some of whom may need extra support. Jamie, as manager, is very keen to get young players involved who are hungry to play football. He is training them and helping them go on to higher levels. The average age of the team is now 17 which is unheard of across the Northern League. They might not be so experienced but the strategy is working and they recently took a team from the league above right through to penalties.

‘This is a good time for Billingham Synthonia and we want to share it with our charity partner Daisy Chain.’