TSB Billingham is pleased to announce that £1,190 has been raised by Partners and customers for their Local Charity Partner, Daisy Chain, since the partnership began in September 2016.

It was fantastic how all Partners got behind the fundraising and joined in with great enthusiasm to support Daisy Chain. It is a wonderful local charity that does invaluable specialist work with children and adults with autism and their families so we were delighted we managed to raise a substantial sum.

It is important to TSB to be involved in the community; it is part of our ethos to enable local communities through our Local Charity Partnerships programme. The programme empowers TSB branches to choose a local independent cause to support with fundraising and volunteering, rather than a single national charity of the year and this is a great contribution from our Billingham branch.

We are very grateful to TSB Billingham for choosing us as its Local Charity Partner. It’s really heartening when a business supports Daisy Chain, recognising how important it is to support families affected by autism, and raises funds which enable us to continue our vital and specialist services.

TSB was built to help hard-working local people and the communities they live in to thrive. To do this, the Bank works in partnership with customers and those in the local community.

That’s why TSB’s branches across Britain are empowered to choose a local cause that matters to them, their customers and their communities instead of having a central ‘charity of the year’, which is common and typical of large organisations.

TSB has given more than £1.7 million to local causes across Britain since its local charity partnerships launched in 2015. This year a record 27,000 nominations were received from local charities across the country to join the programme which sees TSB Partners from 550 branches and eight office sites volunteer and raise money on behalf of the chosen charities. 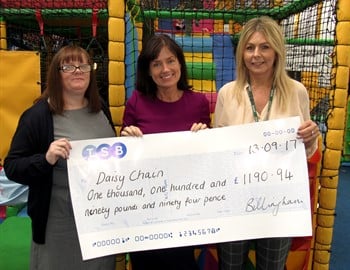